HomeWeddingCheck out the stories behind our favorite celebrity engagements 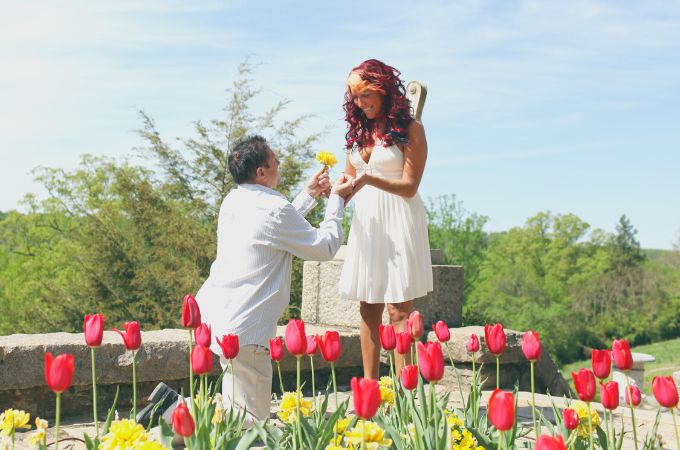 We can’t stop reading about their “I do” and how they got there. We’ll never tire of reading about our favorite celebrity engagements–especially when they’re accompanied by a sweet proposal story. Hollywood’s A-listers are experts in planning a memorable marriage proposal, no matter how unexpected or spectacular.

Must Read: the perfect recipe for a virtual girls night in with your bridesmaids

It was one the most talked about celebrity engagements in 2019. Alex Rodriguez proposed to Jennifer Lopez on March 9, after two years of dating. Jimmy Fallon later interviewed the former Yankees player about their sweet moment and how he worked hard to make it perfect. He explained that he planned the event for six months, and it took place on a Bahamas beach. “I had the ring. But what was most interesting was that I practiced three days straight.” He even had his assistant help with the day-to-day logistics. He said, “I wanted the sunset perfect.”

While the 2018 royal wedding of Prince Harry and Meghan Markle was a global spectacle, their private engagement was intimate. In 2017, the couple revealed the details to BBC, calling the event “just a normal, typical night for us”. The royal proposed to his long-term girlfriend after roasting a chicken. Markle said, “It was just an amazing surprise. It was so sweet, natural and very romantic.” “He got down on one knee.”

Sabrina Dhwore and Idris Elba met through a movie. It also led to their engagement. The Mountain Between Us was the first time they met in 2017. Elba proposed to his partner on February 12, 2018 in front of a crowd of people at Rio Cinema, London just before Yardie’s directorial debut.

Never Miss: how to incorporate pantones color of the year into your wedding

John Stamos is a Disney fan and a fairytale-themed proposal was essential. The Full House alum, Caitlin McHugh, surprised his girlfriend with a short Pixar and Disney movie. Stamos was encouraged to ask the girl after he finished the personalized reel with a modified clip of The Little Mermaid.

Russel Wilson, an NFL quarterback, went all-out for Ciara’s proposal. His future wife was invited to a “travel roulette”, where he gave her a list with 30 countries for her to choose from. He proposed to his lover at a resort in Seychelles.

Most popular: sleeves for a summer wedding can it be done

Samira Wiley, an actress, and Lauren Morelli, a writer, first met on the Orange is the New Black set in 2012. Their friendship blossomed into a love affair, and Morelli proposed to her in private. Wiley told Out Magazine that they had planned to spend the weekend in Palm Springs. “I’m very laid back; if it is five in the afternoon, Lauren wants to beat traffic, I’m just waiting. I was determined to pack well that day. “She came home from work and wasn’t ready to leave, so I was confused.”

Joe Manganiello, actor, proposed to Sofia Vergara. It wasn’t romantic. The Magic Mike star proposed to Vergara while on vacation in Hawaii, December 2014. He used Vergara’s native language as a way to express his love. On Live with Kelly and Michael, he said that he had prepared a large speech in Spanish and was anxious about it. “It’s not something you want to do, but to make the Spanish for the proposal to the Colombian lady look bad.”

George Clooney proposed to Amal Alamuddin (his then-girlfriend), on April 28, 2014. But the process took much longer than he anticipated. Clooney prepared a pasta dinner and proposed to his girlfriend on a night at home. After toasting with champagne and lighting candles, the Oscar-winner sat down and proposed to his lover with a 7-carat-emerald-cut diamond ring.